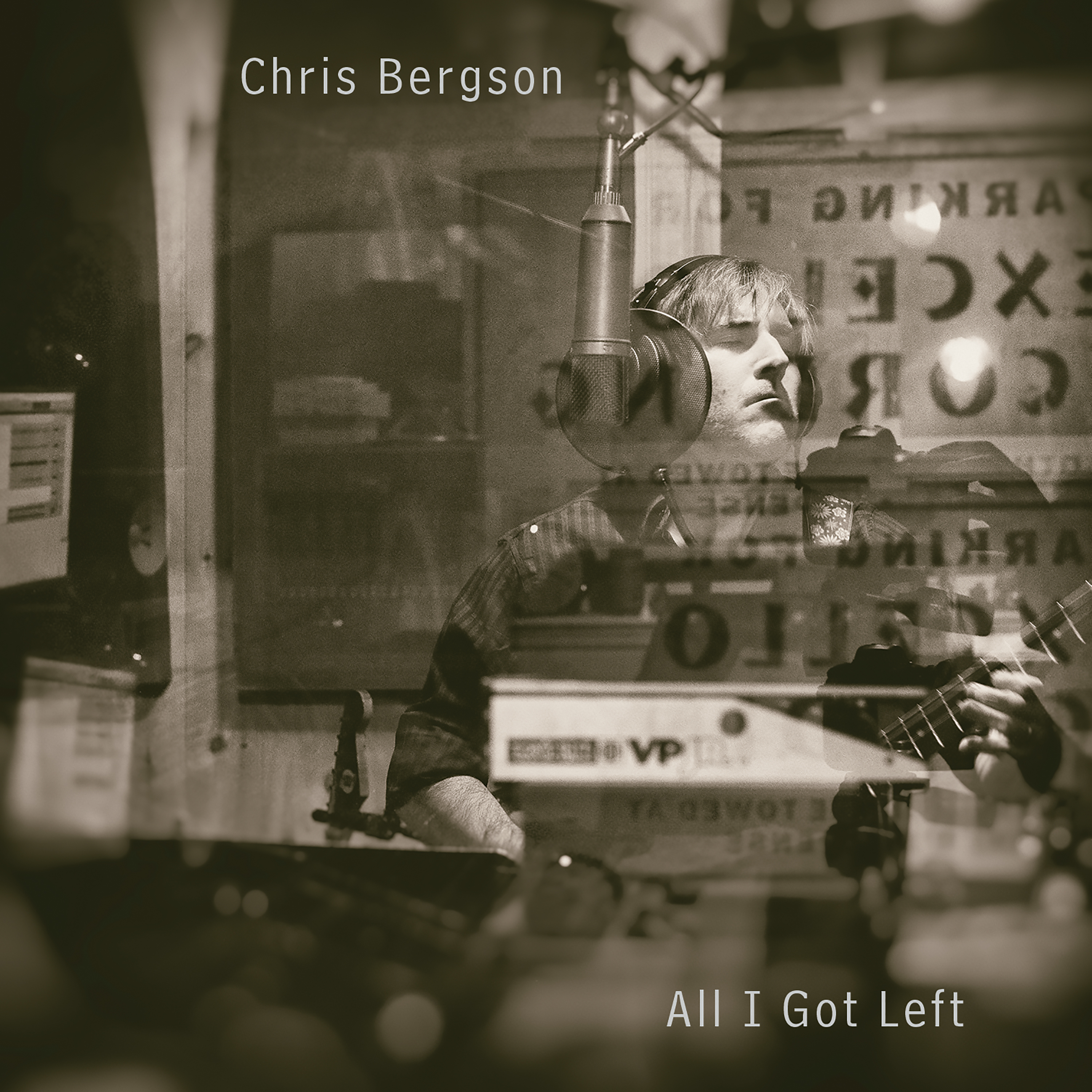 CHRIS BERGSON
ALL I GOT LEFT

All I Got Left – MOJO’s #4 Blues Album of 2021!
“Four Stars…elegant slide guitar chops,” writes MOJO‘s Tony Russell: “But what lingers are lines from lockdown: “I want to believe the cavalry’s coming – but what if this is as good as it gets?”

Vintage Guitar
“This collection of evocative, unaccompanied recordings from singer/songwriter Bergson is inspired by the 2020 lockdown and all that came with it. Highlights include the hopeful title track with Bergson on an SG Standard, along with “Hector and Donna,” a survival story told with an open-tuned ’60s Teisco. Pandemic-era emotions chronicled through the lens of the blues.” – Sean McDevitt, Vintage Guitar

“An absolute beauty emerges from each title.” – Soul Bag (France)

The new solo album from Chris Bergson, is an intimate, stripped-down affair. The album includes original material – both new and reimagined – inspired by lived-in scenes of the pandemic, along with new interpretations of songs by Richard Julian, Glenn Patscha, Chuck Berry and Bob Dylan. Recorded live over two days in March 2021, All I Got Left was co-produced, recorded, and mixed by Hugh Pool at his studio Excello Recording in Brooklyn.

The album opens with Bergson’s soul ballad “All I Got Left.” While singing about isolation and loss, the warm, clear, bell-like guitar tones of Bergson’s Gibson SG seem to offer signs of hope. “All I Got Left” was the first of the new original songs Bergson wrote as the pandemic raged in his hometown of New York City. With everything closed and no gigs in sight, Bergson workshopped and honed the new material, ultimately sharing the music via a series of live stream concerts from his living room. The music on All I Got Left was born out of these concerts, moments of (virtual) connection during a truly frightening and unprecedented time in our collective history.

“I started going on long walks around the city to see how people were coping and adapting day to day,” says Bergson. “Taking in this apocalyptic feeling which hung over the city…the shock of seeing so many empty streets. Living through the unthinkable – a shut-down New York City.” The song “Hector and Donna,” a finger-picked country blues ballad with echoes of Mississippi John Hurt, emerged from these perambulations. Walking along the East River near his East Village apartment, Bergson became aware of the busy maritime scene which inspired “Low Hanging Clouds.” The bright tones of his McCurdy telecaster usher in the Memphis soul groove as Bergson tells the story of a riverboat man who “takes comfort in maritime routines” and is “grateful for this post to report to” amidst so many lives upended by the pandemic.

Bergson slides into the driving Delta blues groove of “Laid Up with My Bad Leg in Lenox,” a song Bergson co-wrote with frequent collaborator Ellis Hooks. The song had joyful beginnings as Bergson and Hooks had just started playing it live before the pandemic hit. One of the last gigs Bergson played before venues were shuttered in March 2020 was with master drummer Bernard Purdie, and this song was a memorable, and prophetic, highlight. Soon afterwards, we were all collectively “laid up” and “limping on down the road,” so to speak, unable to continue with life as we knew it.

“Latitude,” one of Bergson’s older ‘character’ songs introduced on the Chris Bergson Band’s 2007 album Fall Changes, is given an updated solo treatment here. The song portrays a guy who “keeps getting lost in his own house” and playfully acknowledges the challenges of spending so much time at home this past year. This track also highlights one of the strengths of Bergson‘s solo playing – his ability to create a groove and make the listener feel as if there were bass and drums present by punctuating his Freddie King-inspired single-notes with chords and bass lines. The album’s sparkling instrumental “Silver Surfer” is dedicated to the memory of Bergson’s friend Marc Lawrence who passed away from cancer in May 2020.
Bergson turns up his Teisco Del Rey for his swampy hill country blues treatment of Brooklyn songwriter Richard Julian’s “Cheap Guitar,” injecting a bit of wry humor to the proceedings and bringing to mind Mississippi Fred McDowell’s stabbing slide work. Bergson offers balm for the soul with his version of “Last Lullaby,” a gospel-like ballad written by singer/keyboardist Glenn Patscha of the band Ollabelle. The tempo is up for Chuck Berry’s “Back to Memphis,” a rollicking blues shuffle which Bergson performed with the late great drummer/singer Levon Helm of The Band.

All I Got Left concludes with Chris’ haunting rendition of Bob Dylan’s “Blind Willie McTell,” a song which took on new resonance for Bergson during the pandemic. “The song’s opening line ‘Seen the arrow on the doorpost / saying this land is condemned’ really hit home,” says Bergson. He coaxes a gentle, acoustic tone from his Gibson L-5 hollow body guitar as his powerful, deep voice guides the listener through Dylan’s brooding landscape of evocative images depicting struggle, isolation, and loss. “We’ve never needed songs to soothe our souls more than we do right now,” says Bergson offering the songs on this album as a small gift to the listener.